Half Dome was the most beautiful natural site that I had laid eyes on.
It’s a movie scene.
In fact, that’s how I mostly describe Yosemite National Park.
I remember recently seeing a picture of 2 friends at Yosemite and wondering if it was actually a picture they had taken with a green screen and later inserted the background image.
It’s that picturesque.
Acutally Hiking Half Dome was even better (a bucket list item). 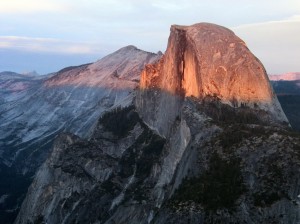 We set out around 8am.
I’m surprised that I didn’t fall on my face, considering I couldn’t stop looking at the beautiful surroundings instead of the trail in front of me.

We arrived at the base of half dome.
There’s a huge pile of gloves that people left behind – how kind.
Why the gloves?
Because we have to climb.
You reach the top of half dome (a granite top the size of multiple football fields) by climbing up an incline granite face while holding on to cable ropes (not a good idea if a storm is approaching).

We headed down and began the second leg of our 14 mile day journey.
Keep in mind that a 14 mile day hike is a big day and that 2 in our party were not used to long hikes nor necessarily in shape for a long hike.
I noted to the group that at our half way point it was X time and that at the same pace we would make it back at Y time (Y = Darkness).
I noted that we needed to pick up the pace.
It was agreed upon but I’m not sure it was truly taken to heart.

And so it got dark.
Miles from our destination, it was dark.
[We later learned that our family talked with the Rangers about search and rescue operations, and since we were dressed and prepared they wouldn’t take action until the following day. While this upset my family, I want to take this time to thank the Park Rangers for not embarrassing us with a night time helicopter spotlight mission at an extreme cost to the American taxpayer].

We hiked on in the darkness.
My uncle found a shortcut route via the map.
And it was and shortcut.
What the map didn’t say is that it was a slippery rocky trail beside a waterfall with no handrails.
Difficult enough by day I’m assuming (not sure, because I never got to see it in daylight) but potentially deadly by night.
I can still see the moonlight glistening off the roaring water just yards off to our right side.
I remember at one point needing to balance and reaching out for some type of handrail and there not being one.
I’ll admit; looking back, this was quite dangerous.
But at the time, we were just focusing on making it back.
Our safety was in Other Hands.

2 more miles to go.
My sister said that she had insane blisters on her feet.
We looked – they were insane (we later found out that her boots felt a bit tight from the start but she hadn’t said anything).
I took off my boots and gave them to her.
How bad could barefoot hiking in the dark be?

1 mile to go.
We reached a road that headed back to the lodge.
We saw headlights. Our family saved us the final paved mile! (they had been driving for hours hoping to spot us – thank goodness they had).

Plenty of Lessons were learned from this trip:

1) Even the youngest person in the group can have insightful information, as their insight may actually be useful (in my case, I was correct that we would arrive well after dark if we didn’t pick up the pace). So never refuse to listen to someone simply because they’re younger than you.

3) Always try on boots well before the day of a hike. This carries over to plenty of other issues of life as well.  Measure twice, cut once.

4) Don’t hike down wet slippery trails beside waterfalls with no handrails – especially at night.

6) Dangerous experiences turn out to make the best memories (as long as you don’t die of course).

7) My uncle was determined to get into better shape and learn orienteering (understanding maps and how to read them). He began competing in orienteering races – not only did he become great at reading maps, he got in great shape during the process. Tough situations can turn into a huge motivator. Use those to your advantage.

8) I also learned that this was not my last visit to Half Dome.
It’s been more than 10 years since I’ve been there, but I have a huge desire to go back.
I read this article in Backpacker Magazine about it being such a crowded hike and how the real purists set out via moonlight and headlamp around 3am arriving to climb the granite face just in time to watch the sun rise.
Then heading back down to pass the first set of hikers heading up for the day.

I have a deep desire to do this and if you’ll stick with me long enough, you’ll see it crossed off my life list.

Have you started your life list yet?
What is one goal (big or small) that you have a burning desire to complete?
I’d love to hear about it!